Thanks to everyone who commented on my last post... I know it was very doom and gloom. I never handle getting injured well and then to lose my buddy of 16 years at the same time... it has been really rough.

And yes before I say anything else I have learned my lesson and will be asking my husband to build me a more sturdy mounting block. It seems as though I can't rely on my cat-like resources anymore... 😜

Being so down and out has also made me really re-evaluate where I am going in life. What do I want and what is fair for my family? It was great to hear the validation that balancing work/horses/motherhood as a mom of young children is hard because I find it extremely difficult.  It was also really nice to hear from you all that keeping my horse hobby as a mom is not selfish. I have a lot of support from my partner to have me-time with the horses, but I feel a lot of external pressure to give up the"extravagant lifestyle" of horse ownership. I do worry that horses are expensive, and that if we didn't have them we could travel more, or do other activities as a family. But on the other hand, I think growing up on a farm, and seeing your mom work hard at a sport she is passionate about is valuable too. I still feel like I am struggling to decide what the right choice is, but it is nice to hear from others that have done this and made it out the other side just fine.

One possibility I am considering is a compromise -- re-home one of the horses. Which still causes a pit in my stomach.  I have been training other people's as well as my own horses for over 15 years -- but always as a side-job and now a hobby. I consider myself a pretty accomplished ammy trainer. Emphasis on the ammy. However, I have only ever had one personal project horse at a time even at my best. Now I find myself with TWO projects, and also a full time job, a toddler, and a serious mom bod. I have never been more out of shape and lacking in confidence than I am in this moment. So.... Maybe this is not the best time to challenge myself with not one, but two untrained horses? I know I could train both of these horses on my own 5-10 years ago.... but now? Maybe not right now. My ego really hates admitting that. 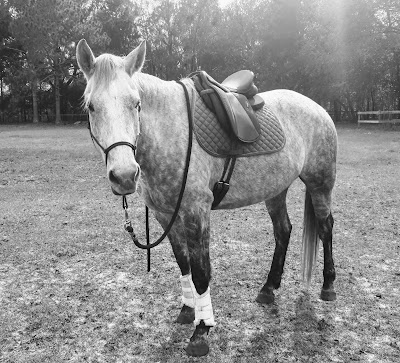 So that is where I am at now...  I am not ready to give up horses completely, but maybe I need to go back to just one project horse. It could be a way to compromise and scale back on my horse spending while still not completely giving up. I would only consider it if I found a better home for one of them than what they have here with me, so no one is going up online or anything.  I am just starting to consider the possibility that there may be a better arrangement out there for them than what I am currently offering. I take a lot of my pride (ego) in my care and training, so I think it takes a lot for me to even consider that there could be something better for them out there, but I am letting myself humor that possibility now...

Oak is doing really well at the trainer's barn. She is having someone else pony him while she just sits on him, and that seems to be a really important step for him accepting a rider.... and definitely a training technique I could not accomplish on my own. She really loves him. She calls him her little hobbit horse.
Posted by Golden the Pony Girl at 10:53 AM 8 comments:

I have been too depressed to post. Also I hate typing with one hand, but I guess it is time for an update.

He was stiff and weird, so I kept pushing him a little just by staying still holding my leg around his barrel waiting for him to relax. Instead he moved sideways. The mounting block begin to tip but I called his bluff by not bailing and saying "whoa". He paused... and then shifted away more (the bastard).... which should have just meant I landed on the ground next to him like I have done a million times. I have even flipped the mounting block once or twice and landed on my feet mostly. But nope not this time. This time when the mounting block flips, I land in a heap on top of it and hit my wrist just right and... snap! There goes my stupid radius.

I laid crumpled in the arena just bawling for several minutes. The wrist hurt of course, but it wasn't that. It was a release of all these emotions of frustration and anxiety that had been building up each session with him. It was the crushing weight of feeling like a failure again and again. And it was the instant realization that all my forward progress with the other two horses and the running will have to come screeching to a halt.

I eventually managed to make it the house and gather up the husband and kid to take me to emergency room. Just as I had predicted I had a broken wrist and I am in a cast for 6-8 weeks.

I am not taking the setback well. I am really low on resiliency right now, and I am being a sulky baby. I admit it, but it was so difficult for me to crawl out of post-partum depression/fog, and I have lost so much confidence in my abilities and physicality since having a baby. I was just starting to feel like I could regain who I was before the baby and before the devastating loss of my partner Bodhi.  Part of me feels like this is the last blow though, and that I should give up on horses and focus on being a mom. I feel selfish that I spend all this money on a hobby that I am floundering so terribly at. I feel like I am not doing these 2 misfit horses any good by not getting them properly trained. I used to be a decent horse trainer, but now I have all this physical emotional baggage that I can't seem to overcome. I feel like I am just wasting everyone's time and I should just call it. I keep trying to relive the glory days of Bodhi and these horses are not him and I am not the "golden the pony girl" anymore.

Oak is at my trainer's farm for a month. I made the excuse that I wanted her to keep him going while I heal, but I secretly wonder if I have just given up.

This picture pretty much sums it all up. I miss my horse, I miss my dog, and I miss my pre-baby body. None of these things will ever be the same, so maybe I should find peace in not chasing them? 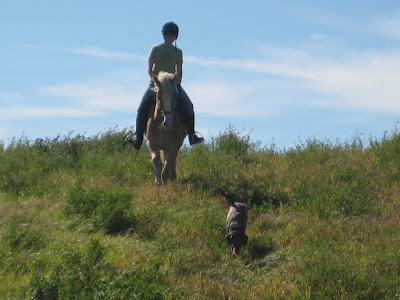 To make it all even worse I had to say goodbye to Stella -the dog in the picture. She had been my sidekick since I was 18. Losing her 2 weeks ago has really solidified the realization that this part of my life is now behind me. Maybe I will find peace if I just let go of horses completely? It is a thought.

If you have made it this far through all of this mopey garbage here are some pictures of my two best friends in the whole entire world. I was really lucky that they picked me to hang out with for the time that they had. They are resting now side by side. RIP good friends. 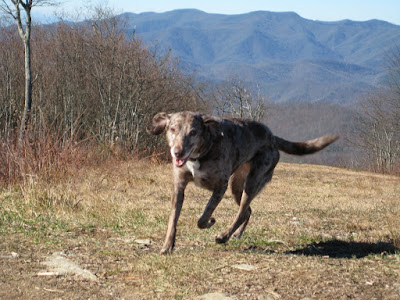 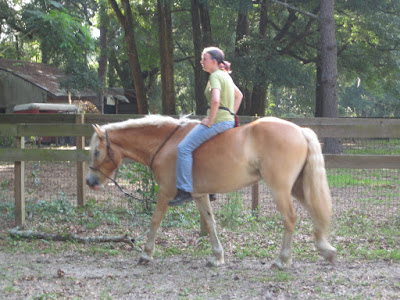 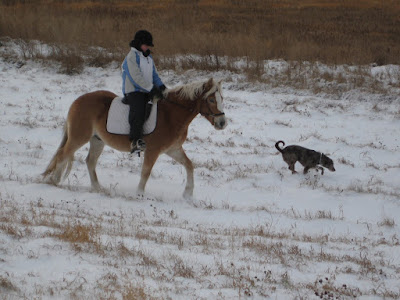 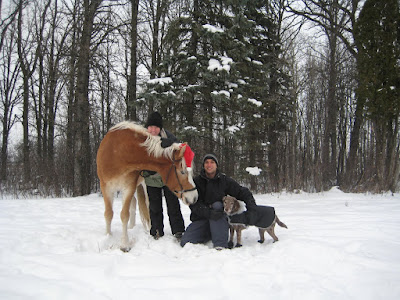 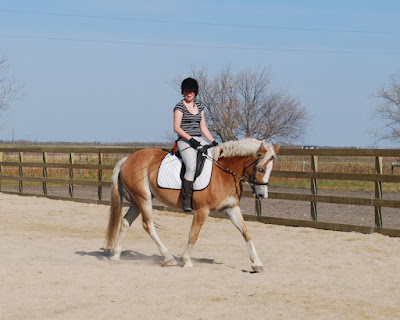 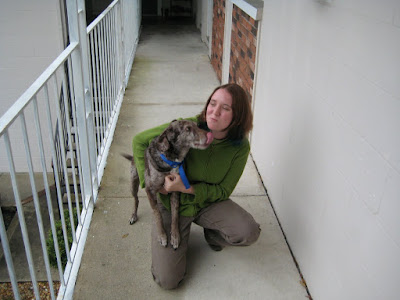 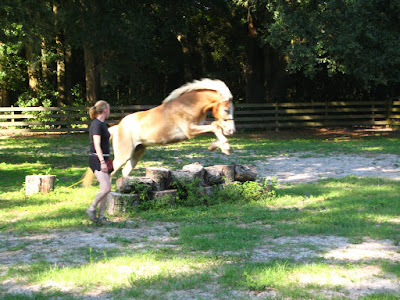